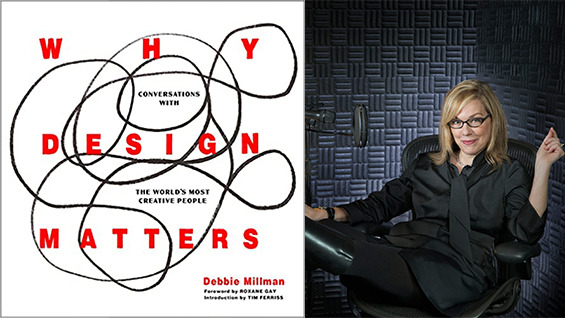 The Cooper Union / Why Design Matters

Award-winning podcast host and branding visionary Debbie Millman is joined by Maira and Alex Kalman for discussion that considers “How do you create a life with purpose and meaning?” The free public program is in honor of the curated anthology WHY DESIGN MATTERS: Conversations with the World’s Most Creative People which features text from Millman’s conversations with the world’s most gifted creative minds, leaders, and intellectuals. The Strand Book Store will sell books at the event.

Registration is required for this free public program at https://bit.ly/cudesignmatters. Attendees must show proof of vaccination and wear a mask indoors.

The first “Design Matters” podcast was released in 2005. Since then, Millman has recorded nearly 500 episodes continuously over the last 16 years, making it both one of the first and longest-running podcasts in the world, and the first ever about design. The book features nearly 60 of Millman’s best interviews, including several with Cooper Union School of Art alumni.

Debbie Millman is a designer and branding visionary who’s been named “one of the most creative people in business” by Fast Company, and “one of the most influential designers working today” by Graphic Design USA. In 2009 Debbie co-founded with Steven Heller the world’s first graduate program in branding at the School of Visual Arts. She’s also an author, educator, curator, and host of the podcast “Design Matters” which has garnered a Cooper Hewitt National Design Award and six Webby nominations. Her artwork is included in the Boston Biennale, Chicago Design Museum, The Wolfsonion Museum, and more. Millman is also President Emeritus of AIGA, one of six women to hold the position in the organization’s 100+-year history.

Maira Kalman is the illustrator of The Elements of Style by William Strunk Jr, the author of My Favorite Things, Principles of Uncertainty, and the bestselling And the Pursuit of Happiness, and the author/illustrator of numerous children’s books. Her artwork has graced multiple covers of The New Yorker, and her watches, clocks, accessories, and paperweights have been featured at the Museum of Modern Art store.

Alex Kalman is a designer, curator, writer, and creative director. He is the founder, director, and a chief curator of Mmuseumm, a new type of museum described as “curatorial genius” by The Atlantic and “one of the top twelve hidden art gems in the world” by the New York Times T Magazine. His artwork, films, installations, and exhibitions have been shown at the Museum of Modern Art, the Venice Architecture Biennale, and the Metropolitan Museum of Art.