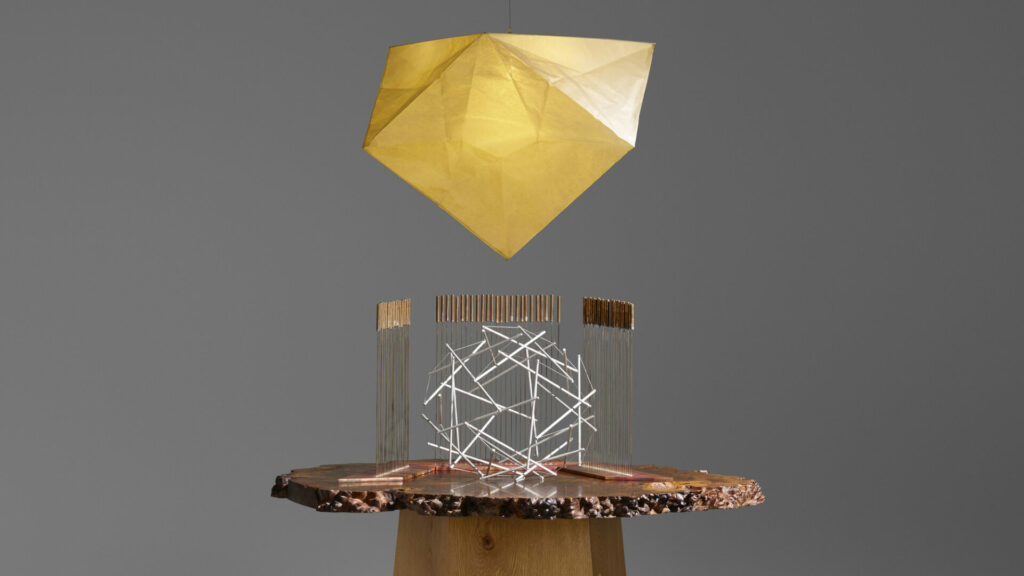 For the first time ever to be displayed in New York, Studio Zung presents ‘Homage to Four Friends: Buckminster Fuller, Isamu Noguchi, George Nakashima, and Harry Bertoia’ on 41 Grand Street. The one-of-a-kind piece is a harmonious symphony between four great minds of the 20th century. Conceived by Thomas Zung, president of Buckminster Fuller, Sadao and Zung Architects, each element is an artwork in its own right, the four pieces come together in an homage that honors friendship, craftsmanship, and timelessness of influence.

The seed for “Homage to Four Friends” was planted in a letter Zung sent to Val Bertoia and Mira Nakashima in 2010, describing his vision of an Homage to Three Friends: Buckminster Fuller, Harry Bertoia, and George Nakashima.

“Like the cosmos, slow movement, the expanding Universe, an Homage to Three Friends. Synergy, where the whole is greater than the sum of the parts” – Thomas Zung.

HOMAGE is comprised of an Isamu Noguchi Akari lamp, a Val Bertoia sounding sculpture, a Buckminster Fuller Geodesic Tensegrity Sphere, and a Mira Nakashima Claro Walnut Burl on a pentagonal Bertoia Oak base crafted by Nakashima Studios. It includes two newly designed nestled bases by Nakashima Studios, signed and dated to the underside of tabletop ‘Mira Nakashima May 10 2021’. Incised signature to one rod ‘R. Buckminster Fuller’. Printed signature to shade ‘I. Noguchi’ with a red circle and half moon. The item is sold with a certificate issued by Val Bertoia. A second Nakashima Table crafted with a Maple Burl top and Walnut pentagonal coopered base dated May 10, 2022 will also be offered during the exhibition.